Parody of a Paradox: Land Ownership

How Far Back Does One Go?

I’ve been reading a lot for a while now about the agendas of certain groups promoting their idea of what they believe to be fair-minded rightful ownership of land.  In this they have swept masses off their feet all in the name of defending the “suppressed”.  While this may be an accurate issue in some cases, the more prominent ones, upon further inspection, are factually inaccurate. Upon studying this, I’ve decided to present, as a fellow immigrant from another hemisphere, some humorous yet poignant perspectives to some of the premise they promote. 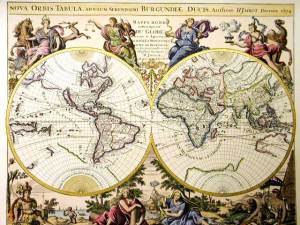 Rightful ownership – United States – Mexico – Native America – Israel – Palestine – China – Tibet – Australia – Aboriginals – ancestral lands –   these are some of the sound bytes chanted by many in demonstrations. You see these groups spelling Texas as Tejas, you hear schools being taught “new history” all based on personal filters and beliefs of those that teach, ultimately undermining actual historical events and indoctrinating the uninformed with a new backdrop. Who are the rightful owners? Let’s really break this down according to what they preach.

So we have groups of people coming together from all races, nationalities and walks of life chanting protests like “give back the land”, “free the so-and-so’s” in righteous indignation—wait just a minute… First of all, if you or I were to get actively involved in a campaign of sorts, I would guess we would have to first be so totally clear in our intent as to be completely committed and aligned to the cause. I would first have to examine my own heritage and roots and decide upon conclusion that based on where I have come from, do I really have the right to be here too? Or should I go back to my ancestral land (for as far back as I can trace) and then commit to my cause from there? Seems logical, doesn’t it? If you talk the talk, then walk the walk—as far back to your land as you can.

As we experience a flash of the past, do we feel connected to civilizations lost? Are they just part of history or do they seem real today?

So let’s use the Tejas example.  Since these groups seem to believe that Texas was taken from the Mexicans, then do the Mexicans have a right to Mexico? I mean, the Spanish influence in Central and South America clearly indicates the Spanish conquering, oppression and maybe—apartheid with the natives at one time? Could it really be? But then the Spanish conquered most of the land from the Mayans and the Incans, the Aztecs and the numerous native tribes that resided all over the Americas… Oh wait… some of them are no longer here—to whom on earth do we return the land rightfully?

So let’s say that I’m an activist on this issue and I am…of English decent, a 10th generation American. Do I really have the right to be living here? Shouldn’t I just go back and preach? But then, am I really English or maybe a blend of an inter-marriage… maybe I’m a product of pre-British Empire…the Roman Empire…Greek…Celtic… Oh God! What am I??? Where is my land? The scenario is ridiculous, isn’t it? As ridiculous as negating human migration which has been occurring since before the Tower of Babel!

In all honesty, unless the average person today has a clear concept about geography, ancient geography, history and geo-politics do we really have the right to be righteously indignant about this? Should we commit to an ideal only if we commit to learning everything there is to learn about it and more, and are therefore certain we know with what we are dealing? Laughably I have watched many a Jaywalking with Leno to understand that some average Americans think that the bordering countries of the United States are Australia and Hawaii…  In many surveys, the average person has not much of an idea of what race or nationality of people belong to which country and which country actually exists—today! Would I be considered absurd if suddenly protested the migration of birds during the year? But they’re not indigenous!

Not just tourists visiting the past, but residents who bridge the past to the present.

For the rest of us humans, indigenous or not, the traditions we may carry till today still connects us to our ancestral past, our people, heritage and land. We blend, we mix, we become a part of a greater society as a whole while still maintaining our heritage if that’s what is important to us as individuals as well as a community.  It may just be that our true identities, where we came from and where we belong is a tapestry of a wonderful blend of this wondrous planet. Migration has occurred long since pre-historic times, some of us have been around for a long, long time, some of us less—a product of the old blended with the new, migration along with expulsions and exiles.  We are a tapestry of our living Earth, and a witness to what has once been and what will be—we, her Human partner from the very start – in  the Beginning…or are we?

“If I had no sense of humor, I would long ago have committed suicide.”  – Mahatma Gandhi

**Note: These are just a few perspectives.  I have more as should we all.

About Flip Your Brain