Is Hollywoodland a Nexus of a Small World or a One-World?

Hollywood has always been a great part of my life. I went to college for 4 years, studying Broadcasting and Cinema. Before that I was singer from a very musical family where music had been much of a profession. Then I spent more than 15 years working in the Hollywood film industry where you might say that increasingly Hollywood became an entity far beyond a community, with its own language, politics, standards and immunities.

As a child I was also being influenced by my parents’ love of music and film, especially American movies and music.  You see, when Singapore was occupied by the Japanese during WWII, their lives were spared right at the very last moment when they had been ordered to dig their own graves to be executed the next.  The very next day heralded V-J Day when American, British and other Allied Forces won the war and it was over.  Therefore while Singapore was a British Colony, they were huge fans of everything American and rightly so.

I remember while growing up, to me as well as many others, Hollywood was America and America was Hollywood.  We learned all about American life, culture and society through American film, music and television.  We also had our equal share of entertainment from all other parts of the globe and frankly, they were never ever synonymous or indistinguishable from each other.  American movie greats, while some were of international fame, still considered the honor and privilege to be a part of an American studio production with its distinct American flair. If you were anyone at all, it all began and ended here.

Increasingly now I have come to a realization that it is becoming progressively more difficult to tell apart between an American production and an international production.  It’s not just a top billing international actor gracing our screens anymore, it’s more a strange blend of culture, tradition and philosophy, lacking in purity and changing in value a final product that would have lent a distinct flavor to further our appreciation.

I for one welcome every now and then, a multi-cultural effort in entertainment, I come from a multi-cultural country and society, but my love for American entertainment is waning as the Industry is watered down along with its influx of foreign talent, standards and ideologies, good and bad.  Has it become better or has it become muddy? It’s not just in Cinema.  American daytime television now has foreign hosts, American news has foreign news-casters, American commercials have foreign spokespersons with such thick accents they’re hardly articulate enough in their diction to actually sell a product in English! We have foreign judges for American musical talents. 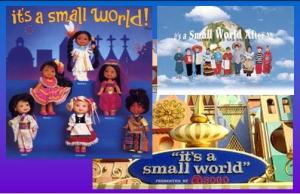 There is a difference to me between importing a product and importing people.  Is it still a small world, like Walt Disney dreamed, or is it one world, one vision like Mao Tse Tung dreamed? Hollywoodland has long opened her borders and given away jobs that would belong to American talent just like any other outsourced product.  In essence it may be a beautiful thing.  In reality you lose your individualism and uniqueness when you cease to maintain defined borders.  Perhaps that’s what one-world means to some.  My personal perspective on this is really – one world, many differences. It’s what makes this diverse world a beautiful place – living together with our differences.  Not eliminating our core attributes. Not by displaying our similarities as a forced all-blended people, but finding harmony within our intrinsic core similarities and learning about our exceptionalism by highlighting our diversity – like many musical notes all distinctive on their own, coming together in a beautiful piece of music.

When John Lennon’s Imagine was first released in 1971, I was a mere child of nine and the lyrics always saddened me.  It saddened me to think even at that young age that the world would be a sad place without Heaven, without countries, without something to live for, without religion, without possessions. In my childlike mind those are the cherished things that stood out and I wondered how that in order to eliminate the negative, we had to also eliminate the positive, that the result could still be peace and sharing, brotherhood and living as one.  It was a song encouraging nothingness, and that was supposed to be everything.

Well we no longer have to “Imagine” the words of John Lennon; Hollywoodland has given us a flavor of it.

About Flip Your Brain